Wmaker in action! The aspect of my desktop is unusually wide because I use two physical monitors side by side. Windows may be dragged accross the screens, you just need a background picture that is up to the task!

WindowMaker (or wmaker for short) is an excellent window manager.

For the uninitiated, a window manager is simply the program that… manages how windows are displayed (seriously!), that let the user move them, resize them, possibly organise them in so-called "workspaces", etc.

Wmaker is free software, free as in "gratis" and, most importantly, as in "Freedom". That means that I have the right (just as anybody) to actually see how it is written, to modify it and to share my modifications with the rest of the world. My main contribution is a patch that adds to wmaker "drawers" that store "AppIcons". While I was at it, I found and corrected a couple of minor bugs.

lead to patches that apply to the last stable version of wmaker (0.92.0 today). These patches generally apply to the version distributed by Debian etch (version 0.92.0-6.1 today) as well. If not, a patch specific to Debian is available through a second icon

Some patches in this table actually require the application of the patches "above them". Therefore, are also available for your patching pleasure

all of the above patches in one, and

all the Debian patches stored in one archive.

How to use those patches

The prerequisite is the ability to compile and install wmaker from its sources. To use the "classic' patches (

links), apply them as follows:

As for Debian patches (

links), drop them in debian/patches:

Naturally confident and lazy? Here you go, if you trust me enough to install this binary package Wmaker 0.92.0-6.1 + drawers.

Contact-me if you run into some unexpected problem, or if everything goes well and you like it! ;-)

I only know of a few minor problems:

Below is a detailled description of some of the patches. 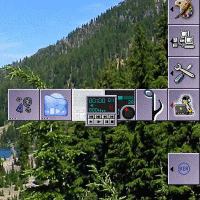 Moving wmusic inside my "audio" drawer.

Description: one life-time achievement ;-). The dock (at the left- or right-hand side of the desktop) may now hold drawers. These drawers may in turn hold --horizontally-- AppIcons, either dockapps or AppIcons from regular applications. Just as the clip, the drawers may auto-expand, auto-raise, or both. Adding AppIcons to drawers, as well as selecting the drawer's icon or place in the dock, is entirely controlable with the mouse.

Bug overview: The switch pannel interacts poorly with the "auto" focus mode and may end up giving the focus to the wrong window.

The switch pannel in action (for decorative purposes ;-).

How to reproduce it:

Correction: it is a matter of ignoring some (EnterNotify) events when the switch panel is active or has just been used.

Bug overview: if an AppIcon is moved rapidly over a Clip set to auto-expand, the latter may erroneously auto-expand afterwards.

How to reproduce it: set a Clip to auto-collapse, and make sure it contains a (random) AppIcon, so as to easily visualise its open/close state. Now move rapidly an AppIcon over the Clip. Try to move it so fast that the cursor sometimes is out of the AppIcon's tile. Then, replace the AppIcon out of the Clip.

Explanation and correction: if, while the AppIcon was being moved, the mouse cursor entered at least once in the Clip's tile, the latter is going to receive an EnterNotify event (after the AppIcon is replaced) and thus expand automatically after the relevant delay. The solution is to simply "gobble" (i.e., ignore) all EnterNotify events when moving an AppIcon.

Explanation: if btn is omnipresent, it has been moved to the current Clip by wWorkspaceForceChange() -> wClipUpdateForWorkspaceChange() -> moveIconBetweenDocks(). Thus, btn->dock is always the Clip in which we entered.

Bug overview: right after start up, omnipresent AppIcons (living in the Clip) are displayed but non-functionnal.

How to reproduce it: place two AppIcons in the Clip, make the first one (A) omnipresent and leave the second one (B) as is. Make the Clip "autocollapse". Move to the second workspace and restart wmaker. Wmaker starts in the first workspace, and the Clip there looks closed (its text color corresponds to the closed state, AppIcon B is not shown), but AppIcon A is displayed. However, A does not react when the Clip expands or collapses. A click on A makes it disappear. Fortunately, changing to another workspace fixes the problem definitively.

Bug overview: When moving an omnipresent AppIcon in a clip, the latter is flickering.

Explanation and correction: the clip and all its AppIcons were drawn systematically, although it is enough to draw them once, at the beginning of the move of the omnipresent AppIcon.

Description: The file $GNUSTEP_USER_ROOT/Defaults/WindowMaker may now contain four new variables (the WPrefs.app programs was not modified to handle them yet, so it is necessary to directly edit the file). The four variables in question are ClipAutoexpandDelay, ClipAutoraiseDelay, ClipAutocollapseDelay and ClipAutolowerDelay. They control respectively the time, in milliseconds, after which the clip auto-expands, -raises (after the mouse entered the clip), -collapses and -lowers (after the mouse left the clip). The defaults values (respectively 600ms, 600ms, 1000ms and 1000ms) are weird IMO but correspond to the values previously hard-coded.

Bug overview: New windows are sometimes mis-placed when the "smart" algorithm is used.

How to reproduce it: be sure (with WPrefs.app, for instance) to use the so-called "smart" window placement algorithm. In an empty workspace, open a first window (for instance, an xterm). The window should appear at the upper left corner. Shade it (hide its contents below its title bar by double-clicking on it) and select another empty workspace. Open another window. Instead of placing it at the exact same place as the first window, wmaker places the new window a little bit lower, or frankly to the right.

Explanation and correction: when placing a new window, wmaker avoided all shaded windows, instead of only avoiding the shaded windows on the active workspace.